Resource Center Resources for Victims and Community Members Read On... 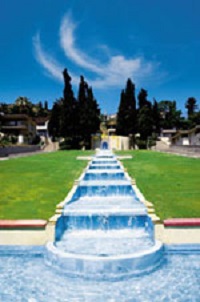 Throughout the 1920s, real estate became a thriving industry with investors attracted to the many subdivisions under development and increasing commercial opportunities.

One such development was the Midwick View Estates by Peter N. Snyder, a proposed garden community that was designed to rival Bel-Air and Beverly Hills. Known as the Father of the East Side, Mr. Snyder was a key player in the vast undertaking in the 1920's of developing the east side as part of the industrial base of Los Angeles. His efforts to build Atlantic Boulevard, his work with the east side organization to bring industry to the east side and his residential and commercial development projects along Atlantic Boulevard (Gardens Square, Golden Gate Square, and the Midwick View Estates) were a major influence to the surrounding communities.

The focal point of the Midwick View Estates was Jardin del Encanto, otherwise known as El Encanto, a Spanish style building that was to serve as the administration building and 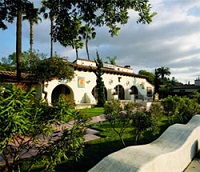 community center for Midwick View Estates and an amphitheater to be nestled into the hillside above Kingsford Street.

Although the amphitheater was never built, the observation terrace from which viewers could look down to Jardin del Encanto and the fountain with cascading water going down the hillside in stepped pools to De La Fuente remains and is now known as Heritage Falls Park or the Cascades. It was result of the Depression that brought an abrupt end to the real estate boom and the Midwick proposal. The city had little development for nearly two decades.