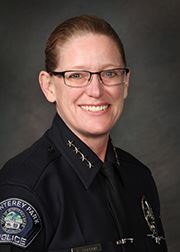 She also worked with FEMA Urban Search and Rescue for over 20 years and is part of the National Disaster Search Dog Foundation. She was a Canine Disaster Search Specialist and her deployments include the World Trade Center after 9/11, Hurricane Katrina, Hurricane Ike, and Hurricane Rita.

She has a Bachelor’s Degree from Cal Poly University, Pomona and a Masters Degree in Leadership from Saint Mary’s College in Moraga, CA. She was the recipient of the 2013 Assembly Member 49th District Women’s History Month Leadership Award and is the recipient of the Montebello PD’s Medal of Merit and Meritorious Service Awards. She is a graduate of the FBI National Academy Class 277.